Lightning-related petroleum storage tanks fires are more common than most people think. Of the 480 tank fire incidents reported in the media, about one third have been attributed to lightning.1 Another study, sponsored by 16 oil industry companies, found that 52 of 55 rim seal fires were caused by lightning, and concluded that ‘lightning is the most common source of ignition’.2

Lightning strikes are characterised by very high stroke currents arriving in a very brief amount of time. For example, an average lightning strike delivers about 30 000 amps of electricity to the ground within a few milliseconds. This current will flow across the surface of the earth until the cell between the thundercloud and earth is neutralised. The current will flow in all directions, although the amount will vary in proportion to the paths of lowest impedance.

The mostly likely strike location on an FRT is the top of the rim or the gauge pole. However, lightning may endanger an FRT if a stroke terminates on the roof, the shell, anything attached to the roof or shell, such as the gauge pole, or a grounded structure or the earth near the FRT. If lightning terminates on any of these locations, or near an FRT, a portion of the total lightning current will flow across the roof-shell interface. If lightning should terminate on the tank shell, as illustrated in Figure 3, sizable currents will flow across the roof-shell interface. 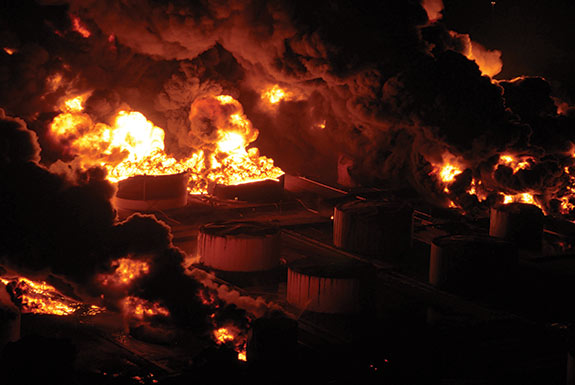 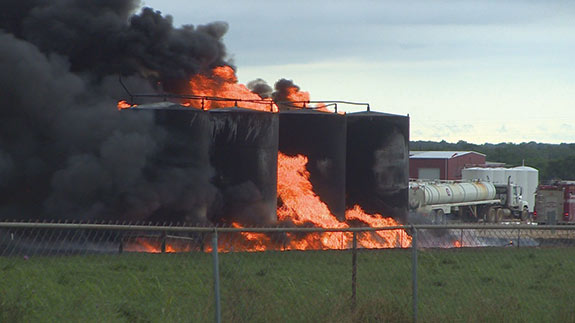 A typical lightning stroke contains numerous components, as shown in Figure 5. The fast component, or first return stroke (Component A in the figure) is extremely brief, yet contains the peak current. The long, slow component (Component C) lasts much longer than either the fast Component A or the transitional Component B and is responsible for vapour ignition.

As a working example, a common storage tank being used in a petroleum-related field operation, such as one being used for saltwater disposal, will be examined. If the tank is partially full, the space above the fluid typically contains a combustible vapour. In a grounded conventional steel tank, the conductive steel allows for charge equalisation between the tank’s contents, the tank itself and ground. However, for a non-conductive or lined tank, there is no charge transfer and equalisation, and so a charge differential between the combustible vapour and ground could occur, as illustrated in Figure 6. A direct or nearby lightning strike will cause a rise of ground potential, and of all grounded objects, by hundreds of thousands of volts in a few milliseconds. If the potential difference between a grounded object or surface is exposed to the vapour and the vapour reaches the electrical breakdown strength of the vapour space, an arc will form and ignition will follow.

Illustration of Current Flows Resulting from Lightning Strike to Tank Shell(Note that current flows across the roof-shell interface in numerous locations.)

Illustration of Current Flows Resulting from Nearby Lightning Strike(Note that current flows across the roof-shell interface in multiple locations.)

Independent third party testing, performed in cooperation with the API and the Energy Institute in the UK, has shown that arcing will occur at the shunt-shell interface under all conditions; it does not matter if the shunts are clean or dirty, new or old, neglected or well maintained. It also does not matter if the inner shell walls are clean, rusty, painted or coated; arcing will occur in all situations. This testing programme has been well documented in API 545-A.

API RP 545 is the ‘Recommended Practice for Lightning Protection of Aboveground Storage Tanks for Flammable or Combustible Liquids’. NFPA 780 is the ‘Standard for the Installation of Lightning Protection Systems’. Both standards recommend installing multiple roof-to-shell bypass conductors on floating roof storage tanks. During a lightning event, Component C of the strike will be conducted by the bypass conductors, thus preventing sustained arcing at the seal interface (it is Component C that causes ignition). The bypass conductors will ensure that the roof and shell stay at the same potential during thunderstorms, thus mitigating the risk of ignition of flammable vapours that may be present. There are thousands of floating roof storage tanks currently in operation, with the majority of them lacking sufficient bypass conductors, thus increasing their risk of lightning-related fires. 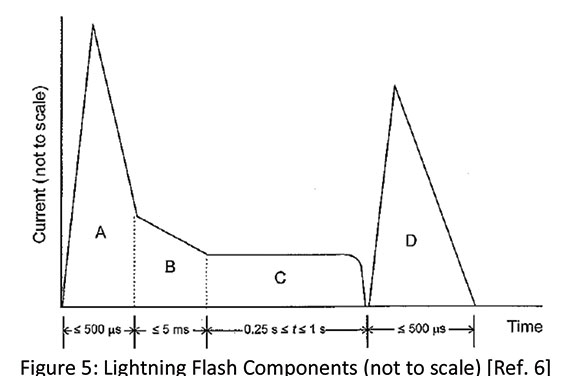 NFPA 77 is the ‘Recommended Practice on Static Electricity’. API RP 2003 is the ‘Recommended Practice for Protection Against Ignitions Arising Out of Static, Lightning, and Stray Currents’. Both NFPA 77 and API 2003 recommend an internal grounding conductor inside all non-conductive and lined tanks being used to store a potentially combustible fluid. This internal grounding conductor must be grounded to earth to effectively neutralise any charge differentials that may exist between the tank contents and ground. The internal grounding conductor should run the length of the tank, inside the tank, and be anchored or somehow secured to the tank bottom. In addition, all metal tank fittings, such as flanges, hatches, etc., must also be bonded and grounded. Ironically, NFPA 77 goes on to state that non-conductive tanks ‘are not permitted for storage of Class I, Class II or Class IIIA liquids’. 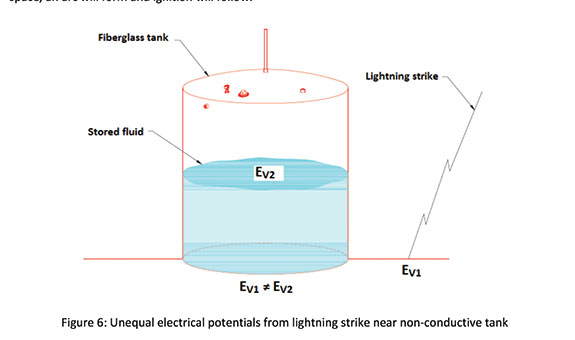 Floating roof petroleum storage tanks and non-metal and lined production tanks are vulnerable to the effects of lightning, for unique but related reasons. Several applicable industrial standards address these situations and offer practical, achievable techniques to lower lightning-related risk. Some lightning protection equipment manufacturers have also responded by designing and manufacturing equipment to prevent lightning-related ignitions on these types of tanks.

Written by Joseph A. Lanzoni, Lightning Eliminators, USA. This is an abridged version of an article taken from the Spring 2016 issue of Tanks & Terminals. Subscribers can view the issue by logging in.

Read the article online at: https://www.tanksterminals.com/storage-tanks/01042016/the-art-of-lightning-protection-2885/