Although safety regulations and industry standards for tank cleaning are stringent, accidents can occur due to human error and the failure of safety devices. Exposure to hazardous petrochemicals, heat stress, lack of oxygen, slips and falls, fires and explosions are the main risks faced by personnel who manually clean oil tanks. 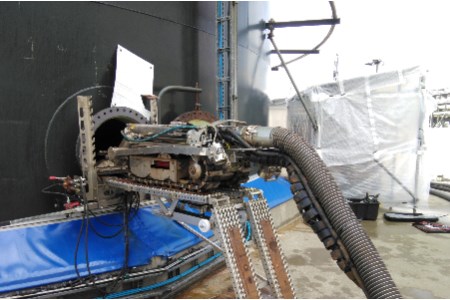 Robotic cleaning technology can be used for non-man entry tank cleaning in vertical, horizontal, over ground or underground vessels. The robots are designed to operate in the most inhospitable environments, and with specialised access cranes, remote ATEX camera systems and engineering expertise, any size or shape of tank can be cleaned.

A smaller, more compact robot is suitable for use on smaller sites and underground fuel storage tanks and containers. The small robot can move through a 450 mm entry hatch, ideal for use in petrol forecourts, interceptors and process tanks.

There is no requirement for personnel to enter the confined space at any point during operation. Each service is performed with adherence to the industry’s safety standards. Cleaning time can also be reduced by up to 45%, significantly decreasing facility downtime while increasing productivity.

Re-Gen Robotics was recently commissioned to clean two 15 m tanks at a gas terminal, which refines and purifies gas from a gas field in the west coast of Ireland.

The first tank scheduled to be cleaned contained methanol. The second tank contained condensate, a low-density mixture of hydrocarbon liquids present as gaseous components in raw natural gas. The tanks were lined with resin and contained a large amount of internal furniture including aluminium legs, skim arms and floating pontoons. The entry manholes were raised slightly higher than standard tanks and there was a great deal of piping situated on the ground around the tanks’ exteriors.

Upon initial inspection, it was noted that a portable raised platform would be required to allow the robot to pass freely over the exterior pipework, to meet the manhole entry ramp. The platform was supplied by the client and was also used for the second tank clean.

During the cleaning process, the operator remained in the Zone 1 control unit where they could monitor activity through a series of ATEX cameras and gas monitoring equipment fixed to the robot. The operator did not need to enter the confined space at any time.

The unique features of the large robot made it ideal for cleaning the storage tanks. A combination of specially designed 3500 psi jetting water nozzles, powered by a high-pressure low flow pump, played a vital part in the cleaning process.

The sludge was then extracted by the ADR certified jet/vac tanker with 4800 m3/h vacuum capacity. Using a fully contained waste removal and a 360° cleaning process, the waste material was transported offsite using an ADR tanker and safely treated in an authorised, licensed facility.

The tank cleaning operation was recorded using closed-circuit television (CCTV) from the ATEX cameras and was made available to the client upon completion of the works. All files are date and time stamped to ensure the process is traceable for auditing purposes.

Once each vessel had been cleaned, a record of gas detection readings produced by the on-board gas monitoring equipment was provided. Final readings were confirmed, the tanks were handed back to the client and the robots were demobilised.

In this case study, Re-Gen Robotics reduced the tank shutdown time by half and the tanks were cleaned faster than anticipated.

There was no need to implement social distancing measures to limit the spread of coronavirus. Since only two crew members are required to complete a cleaning operation (one to control the robot and the other to operate the tanker) there was no human to human contact. The robots could carry on as normal, allowing a return to operations ahead of schedule.

Since this case study, new adaptions have also been developed to expand solutions further.

For example, an offset suction head has been developed to clean under water suction pipes around the external diameter of tanks. The offset suction head is a low-profile tool to access under pipes and has the ability to remove waste from below floor level as well as the ability to operate offset on the left, right and straight-ahead positions. This tool alone has decreased tank cleaning time by 10 – 12%. A 360° full-coverage washing head has been developed. This has the capability to wash the walls and the roof of tanks and affords faster turnaround times by 10% on floating roof tanks, where roof washing is included in the scope of works on tank cleans.

An intelligent onboard truck telemetry system to track waste also provides the opportunity to collect telemetry data that can then be aggregated and analysed in order to optimise the process. The combination unit provides real time information on all key parameters and is accessible to clients. This technology can evaluate information such as waste generation, hours worked per day, water consumption on each project, and the jetting pressures recorded for the duration of a tank clean.

Enhanced ATEX lighting also allows for easier and quicker inspection at ground level and for areas with difficult access.

Given that tank inspections can now be carried out via a CCTV system, terminal operators can further reduce their confined space entry (CSE) time and eliminate the need for spading tanks, a further saving on mechanical works during the tank outage.

These technologies allow for a safer, cleaner and more efficient alternative to ‘man entry’ tank cleaning.

Read the article online at: https://www.tanksterminals.com/special-reports/27112020/rise-of-the-robots/