Asset Integrity Maintenance (AIM), a West Lothian based firm, has been awarded a major contract that will help extend the life of the ExxonMobil jetty facility at Braefoot Bay Marine Terminal in Fife. 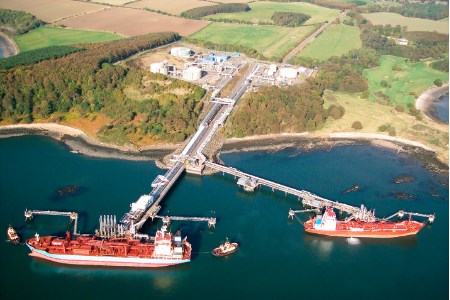 The tanker terminal exports liquefied petroleum gas to Europe and the USA after being produced at Fife Ethylene Plant, using feedstock from the North Sea.

A team of six specialists from Linlithgow based AIM have started working at the 233m long jetty for the first phase of a major upgrade programme. This phase alone represents an investment of some 3000 man-hours. As part of the work, they will be using a cutting-edge temporary access structure, which will be suspended below the jetty and enclose the work area to ensure no environmental impact to the Firth of Forth below.

The project represents the beginning of a major investment in the jetty, which handles shipping of ethylene from the Fife Ethylene Plant (FEP) to ports in mainland Europe.

Jacob McAlister, plant manager at FEP, said: “The project at Braefoot Bay is integral to an extensive programme of maintenance and modernisation work at FEP. Adding many years to the operational life of the jetty is an exciting development. It will take our operations in to a new era and means we can continue to contribute to the local economy and employ local contractors and personnel.”

AIM’s scope of work will focus on the refurbishment, repair and protection of the jetty’s steelwork coating and will use both abrasive materials and a vapour blasting technique that are environmentally friendly.

Located on the northern shore of the Firth of Forth, between Dalgety Bay and Aberdour in Fife, Braefoot Bay Marine Terminal began operations in 1984.

As a major employer in the area for more than 30 years, around 270 employees and core contractors work at FEP with more than 60% living within ten miles of the plant.

Read the article online at: https://www.tanksterminals.com/terminals/30052019/asset-integrity-maintenance-appointed-to-exxonmobil-jetty-life-extension-project/

A new study released by API and conducted by researchers at ICF has examined the environmental benefits of US LNG use in China, Germany, and India.