According to the US Energy Information Administration (EIA), the distillate oversupply in Europe is causing some shippers to take the long route around Africa.

In Europe, the low winter heating demand, high refinery runs, and increased imports have kept distillate fuel oil inventories in the Amsterdam, Rotterdam, and Antwerp (ARA) area far more than normal. This has resulted in lowered distillate futures prices in the ARA area. Inventories are being held in floating storage and imported cargos are being diverted to longer voyages.

Europe is a net importer of distillate fuel oil. In addition to Russia and the US, Europe imports distillate from the Middle East and India. Ships departing from those locations have two options to get to the ARA area: a key port and transit hub for petroleum and refined products. 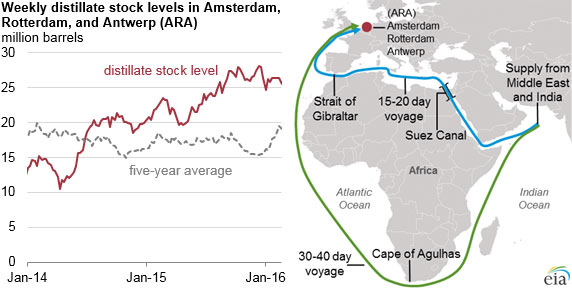 Source: US Energy Information Administration, This Week in Petroleum.

The shorter route is through the Red Sea, the Suez Canal, and the Strait of Gibraltar. The longer route involves going around Africa's southernmost point, the Cape of Agulhas. The longer voyage allows more time to find a buyer, or onshore storage space, and also provides a return from the higher priced, later delivery date.

Trade press reports suggest that several cargoes from the Middle East and India are opting for the longer voyage.

According to the EIA, contango is a situation in the futures market where prices for delivery dates further in the future are higher than those for more proximate delivery. When contango in the future contracts become sufficiently large, market participants can lock in a profit by purchasing distillate supplies on the spot market, chartering a vessel, and selling a longer-dated futures contract.

Source: US Energy Information Administration, based on Bloomberg.

Futures prices for gasoil (distillate) on the Intercontinental Exchange (ICE) gasoil futures market are currently in a wide contango. Distillate inventories in the ARA area have exceeded the previous five-year average since the middle of 2014.

The factors mentioned above have pushed independently held distillate inventory levels in the ARA area to more than 26 million bbls in recent months, more than 7 million bbls higher than the five-year average.

Read the article online at: https://www.tanksterminals.com/storage-tanks/26022016/taking-the-long-route-around-africa-2597/

The House of Representatives is set to take up the Inflation Reduction Act of 2022 that covers tax, energy, climate and other issues that impact the refining and petrochemical industries. After careful review, AFPM opposes this legislation.