Israeli state-owned company Europe-Asia Pipeline Company (EAPC) and MED-RED Land Bridge Ltd (MRLB), signed a binding memorandum of understanding (MOU) for the collaboration in storing and transferring of oil and oil products through the EAPC pipeline network and storage tanks, from the UAE and other Eastern markets to the Western markets, and from the Mediterranean to the Far East. 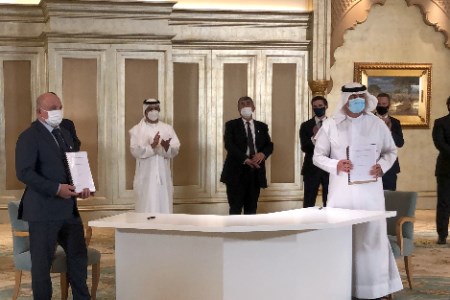 MRLB is a joint venture (JV) between Petromal, an integrated oil and gas company based in Abu Dhabi, UAE, and Lubber Line, an international company owned by Yariv Elbaz, which specialises in investment in international projects in the infrastructure and energy sectors; and AF Entrepreneurship, an Israeli company owned by Yona Fogel and Malachi Alper, which develops and operates projects and ventures in the energy sector.

The signing ceremony in Abu Dhabi concluded several weeks of negotiations among the parties to create one of the first public-private-partnerships between an Israeli state owned company and a joint venture with a UAE based company since the signing of the Abraham accords this past August.

The signing ceremony was held during the first Abraham Accords summit in Abu-Dhabi, attended by Steven Mnuchin, United States Secretary of the Treasury, His Excellency Obaid Humaid Al Tayer, Minister of State for Financial Affairs, and His Excellency Hisham Abd Ahmid Ahmid, Chairman of Petromal.

The collaboration is significant news for the global energy market, since it offers oil producers and refiners a short and cost-effective route to transport oil and oil products from the Arabian Gulf to the consumption centres in the West, and provides access for consumers in the Far East to oil produced in the Mediterranean and Black Sea regions. MED-RED is in negotiations with major players in the West and in the East for long-term service agreements.

According to the MOU, EAPC will provide management services of the infrastructure, enabling transmission and storage of the oil and oil products.

The geopolitical changes in the Middle East, as witnessed by the Abraham Accords recently signed between Israel and the UAE, directed by the Trump administration, have opened opportunities for mutual endeavours in diverse areas, including the energy sector. The MOU signed today is a testament to the spirit of the Abraham Accords and an important milestone in harvesting the fruits of the Accord towards the goal of regional peace and normalisation in the Middle East.

His Excellency Hisham Abd Ahmid Ahmid, Petromal Chairman, said: “We are pleased that Petromal is part of this public-private-partnership, the first of its kind since signing the historic agreement between the UAE and Israel. We look forward to working closely with our new partners to execute this venture and add value to the global energy security. This opportunity would not have been possible had it not been for the signing of the Abraham Accord, and we continue to look for more areas of collaborations to generate more value for both UAE and Israel Economies.”

Erez Halfon, EAPC Chairman, said: “This is a historic agreement, which further broadens EAPC’s international collaborations. There is no doubt that this agreement is of high importance to the Israeli market, both economically and strategically, with joint investments extending a decade into the future. I am thrilled about this collaboration with our friends from the UAE, our neighbours in the Middle East. This commercial agreement has clear geopolitical significance.”

Itzik Levy, EAPC CEO, said: “The MOU which was signed today is a historic milestone which will strengthen the Israeli economy, ensure energy security for the countries in the region, and propel EAPC and the Israeli economy forward.”

Read the article online at: https://www.tanksterminals.com/storage-tanks/21102020/eapc-and-med-red-jv-form-an-alliance/