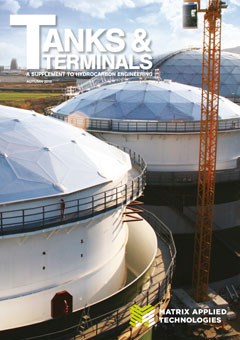 In the Spring issue of Tanks & Terminals magazine, I wrote about the glorious weather that we were treated to here in the UK during the Royal Wedding. Since then, I am surprised to report that the sun has (uncharacteristically) kept shining for almost the whole of our summer. In fact, this year has produced the UK’s longest heatwave since 1976, sparking record sales of ice creams, mass congestion at the UK’s beaches and long days spent in pub gardens.

Britain’s parched landscape has even revealed a number of prehistoric sites long thought to be lost, such as Iron Age settlements, Roman farms and Neolithic ceremonial monuments.

However, the heatwave that has gripped much of the northern hemisphere has also had some devastating consequences. Wildfires have raged (even in the Arctic Circle), crops have suffered, and infrastructure has been pushed to its limits. And that is not to mention the immediate health impacts of prolonged periods of unprecedented heat. In July, Japan’s weather agency declared the heatwave a natural disaster after 65 deaths in the space of a week.

The long hot summer has also had a number of implications for the storage industry. In July, S&P Global Platts reported that the lack of rain across northwest Europe resulted in rising costs to transport oil products through Europe’s key inland waterways: “Barge freight rate costs have surged […] as Rhine water levels fell to perilously low levels, slowing barge traffic and causing the region to struggle to refill its inland tanks.”1 The low river levels have caused supply problems for key inland consumers, such as Germany and Switzerland.

Terminal operators also have to contend with a number of significant challenges during the extreme weather, as outlined in an article by Francesca Crolley, Synavax Inc., in this issue of Tanks & Terminals (starting on p. 49). Crolley explains how summer can be the worst season for products that need to be stored at cool temperatures. She notes that heat gain/evaporation and condensation are particularly troublesome, citing a report from IOP Science that estimates that approximately 50% of operational losses in the chemical and petroleum industry are due to evaporative losses.

Of course, soaring temperatures are not the only meteorological challenges that the sector has to contend with. As the summer draws to a close, the Atlantic hurricane season is kicking in and Crolley’s article goes on to explain how autumn, winter and spring present other unique challenges to the tanks and terminals industry.

Besides talk of the weather, I am pleased to announce that Tanks & Terminals has launched a brand new website dedicated to the storage industry. Please visit www.tanksterminals.com to keep up-to-date with the latest industry news and to subscribe to receive a regular copy of the magazine.