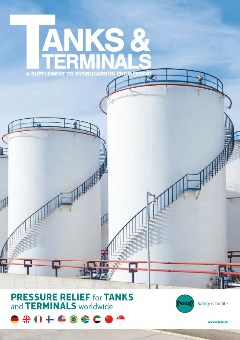 It’s an interesting time for the oil and gas storage industry. Plans for new tank farms, terminals, as well as logistics and distribution infrastructure, are cropping up all over the globe as the demand for storage continues to mount. However, as onshore inventories swell, offshore vessels or tankers, which can serve as practical temporary alternatives while permanent onshore facilities are being constructed, are becoming an increasingly attractive option, particularly within the gas realm.

The market for floating LNG (FLNG) and floating storage and regasification units (FSRUs) has grown exponentially over the past few years – and it’s easy to see why. As well as offering an efficient storage solution, they provide a flexible, cost effective way to receive and process shipments of LNG. And more market growth is just around the corner – global capital expenditure on FLNG facilities is forecast to increase significantly over the 2016 - 2022 period. Capex will total US$41.6 billion to 2022, according to Douglas-Westwood (DW), compared to US$11.4 billion over the 2011 - 2015 period – a whopping 264% increase! Liquefaction vessels will account for approximately 59% of forecast expenditure, with the remaining 41% allocated to import and regasification terminals, according to DW’s research.

In keeping with this prediction, a number of project developments have come to light over the past couple of months. In July, Mitsui O.S.K. Lines (MOL) announced that its subsidiary Lakler S.A. had agreed to conclude a long term charter contract with Gas Sayago, a joint venture between Uruguay's state oil company ANCAP and state power company UTE, for a major FSRU project. The unit will be equipped with the largest LNG storage tank of any FSRU in the world (263 000 m3), and will supply gas to Uruguay and its neighbouring countries. It is currently under construction at Daewoo Shipbuilding & Marine Engineering Co., Ltd in South Korea. Following completion, it will enter a 20 year charter, starting in the first half of 2018.

Moving east to Asia, Excelerate Energy L.P., Petrobangla and the Government of Bangladesh established a terminal use agreement (TUA) and implementation agreement (IA) for Bangladesh's very first LNG import terminal – the Moheshkhali Floating LNG project – in July. Located offshore in the Bay of Bengal, it will be the world's first fully integrated turnkey floating LNG terminal, whereby all services will be provided under a single contract by a single provider, Excelerate Energy, which will operate the terminal for 15 years (after which ownership will tranfer to Petrobangla). The project includes the provision of one of Excelerate's existing FSRUs, the installation of a subsea buoy system, and the employment of port service vessels during operation. The unit will have 138 000 m3 of LNG storage capacity and a base regasification capacity of 500 million ft3/d – operations are expected to commence by 2018.

Heading south along the Indian subcontinent, in August reports surfaced that Krishna Godavari LNG Terminal, a holding company of US-based Vessel Gasification Solutions, Inc., had received the 'in?principle' nod from Andhra Pradesh's Energy, Infrastructure & Investment Department for the setting up of a US$750 million, 7.2 million tpy floating LNG terminal offshore of Kakinada Deep Water Port.1 It is the first LNG project on India’s East Coast, and will allow for the full utilisation of some 7000 MW of near-idled power plants, laying the groundwork for an ‘industrial renaissance’ within the coastal region of Andhra Pradesh and Orissa.

Despite near term apprehensions – the oil price crash has impacted the authorisation of costly liquefaction units over the last couple of years – the long term possibilities of FLNG and FRSU technology are evident. Natural gas will continue to play an important role in the global energy mix, and, as DW asserts in its 'World FLNG Market Forecast 2017 - 2022', the rising cost of onshore development terminals and the shorter lead times for floating units makes the technology a viable option in the current market environment.