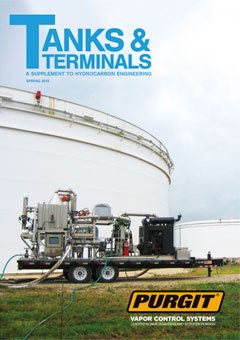 The rise of unmanned aerial vehicles (UAVs) or drones has been enormous in recent years. With seemingly endless applications for the robotic technology, this growth is set to continue. Aside from military use, drones can be utilised in a range of industries including aerial photography and filming, shipping and delivery, search and rescue, geographic mapping, wildlife monitoring, and storm tracking, to name just a few. They have even been deployed in Japan to try and battle the problem of overwork. In trials, the robots have hovered around offices to encourage workers to go home – either by filming those that stay late, or by playing loud music.

The oil and gas sector is also starting to embrace the technology. This issue of Tanks & Terminals includes two interesting pieces from Cyberhawk (p. 30) and Avestec (p. 35), who present the advantages of drone-based inspection methods for the storage sector. The benefits on offer include reduced inspection time, improved safety, the ability to access hard-to-reach areas, reduced downtime, and enhanced data collection.

However, at the end of last year, drones hit the headlines here in the UK for all the wrong reasons. Between 19 and 21 December, approximately 1000 flights were cancelled or delayed at Gatwick Airport following reports of drone sightings close to the runway. More than 140 000 passengers were affected during the 36 hours of chaos that ensued. The Royal Air Force (RAF) was called in to help with the problem, and they eventually withdrew on 3 January after Gatwick Airport spent £5 million on a system to prevent future attacks. Soon after, drone sightings briefly caused delays at Heathrow airport. The UK government has now confirmed that all of the country’s airports will soon have military grade anti-drone equipment, and ministers are working to ensure that similar technology is installed at other critical infrastructure.

The enormous disruption serves as a reminder that drones can present a more sinister threat. This was also seen last year when the Iranian-aligned Houthi movement in Yemen claimed that it had attacked a Saudi Aramco refinery in Riyadh, Saudi Arabia, using a drone.1

Laws and regulations are struggling to keep pace with the development of drone technology. The widespread availability of commercial drones, combined with the fact that they can often fly in unmonitored and minimally regulated airspace, presents a real security threat. Now is the time for the energy sector to assess the risks and create guidelines and protocols to protect itself.

A range of counter-measures have been developed to minimise the danger. Rogue drones can be detected using cameras, radar and radio frequency sensors. It is then possible to ‘jam’ the communication between a device and its operator, which causes it to initiate a default mode and fly back to its original location. Other companies have developed bazooka-like guns, or ‘interceptor’ drones, which can fire nets at rogue drones, trapping them and causing them to fall from the sky. Lasers also have the capability to shoot down drones quickly. Meanwhile, in the Netherlands, eagles have been trained to intercept drones in midair.2

In addition to considering the multitude of benefits that drone technology can offer to the energy sector, it is becoming increasingly important that the industry takes the necessary steps to safeguard its infrastructure from the potential threats that nefarious drones may present.