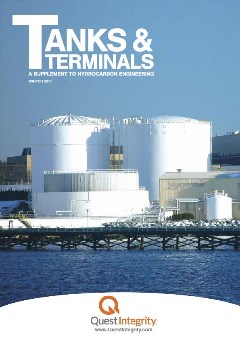 Since the last issue of Tanks & Terminals was published, the US oil and gas storage industry has had to contend with a particularly powerful hurricane season. While Hurricane Harvey caused widespread destruction across Texas – IHS Markit estimates that the damage from the Category 4 hurricane will total US$60 – 100 billion, making it the second most destructive storm on record1 – it is fair to say that the energy industry stood up well to the unprecedented challenges that the storm presented. As mentioned in the comment that I wrote for the October 2017 issue of Hydrocarbon Engineering, most of the refineries affected by the hurricane quickly resumed operations, while the NYMEX RROB spot price essentially returned to pre-hurricane levels within a month of Harvey making landfall.

While a collective pat on the back is well deserved in the face of such adversity, there are several valuable lessons that the storage industry must learn from this recent challenge. The storm resulted in a number of significant tank failures, with floating roofs coming under the most intense spotlight. The Houston Chronicle reported that there were more than 15 incidents of floating roofs falling on top of oil storage tanks during the storm, impacting the likes of Valero Energy, Shell, ExxonMobil, Kinder Morgan, Phillips 66 and Magellan Midstream, amongst others.2 As torrential rainfall began to accumulate on some of the floating roofs, drainage systems started to fail and the roofs began to leak, sink or even collapse. Some are now calling for an inquiry into the potential weaknesses of floating roofs, as part of a broader industry review of tank failures. A key area of concern has been a lack of design standards and best practices pertaining directly to floating roof tanks.

This concern is echoed in an article from Concord Tank that features in this issue of Tanks & Terminals. The article examines how common mistakes can cause floating roofs to sink, presenting an example of problems that can be associated with floating roof repair work. The article traces the troubles back to a lack of clear construction, inspection and repair guidelines for floating roofs within the API’s standards. Concord Tank argues that the current standards foster the perception that floating roof repairs are not as critical as floor and shell repairs, while offering fewer constraints for inspectors, engineers and repair contractors. The company suggests that there are three core elements that need to change in floating roof repair projects (turn to p. 25 to find out more).

Other topics covered in this issue of Tanks & Terminals include leak detection, level measurement, corrosion protection, and cleaning and inspection. Contributing Editor, Gordon Cope, also provides an overview of the storage industry in the Middle East and North Africa (p. 12).

I hope you enjoy the issue and would like to take this opportunity to thank our readers, contributors and advertisers for their support throughout 2017.